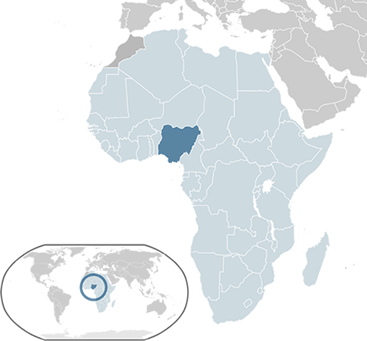 Nigeria is in West Africa, along the eastern coast of the Gulf of Guinea, and just north of the equator. It is bordered on the west by Benin, on the north by Niger and Chad, and on the east by Cameroon. Nigeria covers an area of 356,669 square miles (923,768 square kilometers), or about twice the size of State of California. The borders of modern Nigeria were not created until the British colonial amalgamation in 1914. More than 250 ethnic tribes call present-day Nigeria home. The three largest and most dominant ethnic groups are the Hausa and Fulani (29%), Yoruba (21%), and Igbo (18%). Other smaller groups include the Ijaw, Kanuri, Ibibio, Tiv, and Edo. These ethnic groups had separate and independent histories prior to colonization and never considered themselves part of the same culture. There are 36 political states. Nigeria is the most populous African country. Nigeria’s population is estimated at more than 155 million people. It is the most densely populated country in Africa. Nearly one in six Africans is a Nigerian.

Igboland and the Igbo People’s Culture

Igboland is approximately located in the central southern part of Nigeria. Igboland is bounded in the south by the Bight of Bịafra (in the Atlantic Ocean); in the west, are the Urhobo people (and the kingdom of Benin), along with the Ịgalas, Idomas; Tiv peoples are found on its northern borders; while the Efik and Ibibio peoples occupy the eastern boundary. Igboland was known as Terra incognita –“unknown land” for centuries. Partly because of its geography. Igboland had a partial natural shield from foreign invaders due to the rivers surrounding most of its . Igboland as is known today was never defeated or invaded by any foreign force. Its natural boundaries were reinforced by the Igbo traditional warriors who lived at the border regions of the Igboland and protected it from foreign invaders like the Islamic Jihad of the 18th century that overwhelmed parts of Northern and Western Nigeria.

The Ekumeku warriors were stationed on its western borders to contain the then powerful Benin Empire; the Nsukka and Ezza warriors defended the northern and eastern borders, respectively. There are two major seasons of the year — the dry and rainy seasons and there are no significant perennial weather extremes or processes prevalent in Igboland. Igbos have an estimated population of about 40 million people worldwide with an always increasing birthrate and have remained one of the most populous homogenous groups in Afrịca.

The are strong similarities between the Igbo and Jewish cultural lives which suggest the possibility of having a common origin. Igbo traditional religion and Judaism have much in common and Christianity is not strange to the Igbo people. Igbo traditional religion hinges on the Supreme Being God, called: Chi or Chi Ukwu or Chukwu or Chineke (God the Creator). Chukwu has unlimited powers in Igbo religion and His aura permeates every fabric of Igbo cultural life. The Igbo people have clans that make up the Igbo tribes which constitute the ethnic platform with a unifying language and common cultural patterns. The Igbo societal cultural pattern is a tribal system that has no centralized political authority.

Hence there were myriads of Igbo Kings in a decentralized socio-cultural system. This gave rise to the popular phrase “Igbo Enwe Eze.” “Igbo Enwe Eze” intimates that even though Ndi Igbo had “Kings,” there was no “central” Igbo King.

Staple foods include: Cassava and its many derivatives like Gari (granular form) and Akpu (starchy form like mashed potatoes) . Ji (yam) is a popular tuber that can be up to 2 feet long and 6 inches in diameter).

Below are a few examples of Igbo traditional outfits for men and women.

In addition, two traditional Igbo musical (and cultural) instruments – the Ogene and Ekwe are displayed. These two pieces of Igbo instruments are important not only for “making” music but also for important community events like summoning meetings, and sounding alarms and alerts, and are important cultural icons.

Nigeria has three main environmental regions: savanna, tropical forests, and coastal wetlands. These environmental regions greatly affect the cultures of the people who live there. The dry, open grasslands of the savanna make cereal farming and herding a way of life for the Hausa and the Fulani. The wet tropical forests to the south are good for farming fruits and vegetables—main income producers for the Yoruba, Igbo, and others in this area. The small ethnic groups living along the coast, such as the Ijaw and the Kalabari, are forced to keep their villages small due to lack of dry land. Living among creeks, lagoons, and salt marshes makes fishing and the salt trade part of everyday life in the area.